SEMA's failure, and a possible conspiracy between the EPA and Automakers? 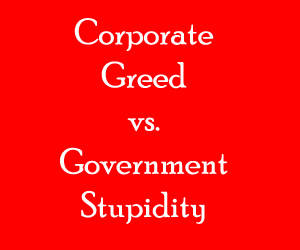 SEMA is guilty of negligence.

It wasn't until February 8, 2016 that the association created to, in its own words: ".. protect consumers' rights to drive accessorized, customized and vintage vehicles." realized that in a July 2015 publication proposing setting fuel economy standards for commercial trucks,  the EPA buried an announcement that it will ban race cars built from passenger vehicles unless those vehicles retain the emission controls with which they were originally equipped.

Any trade association self-appointing itself as being responsible for monitoring a behemoth governmental entity such as the EPA cannot allow any publication, press release or public utterance by that organization go unscrutinized, yet SEMA did.  As a result, the comment period passed without a peep from SEMA.  SEMA has filed a protest claiming the EPA failed to follow federal rules that would have alerted the public (and SEMA) of the proposed change.

The EPA is claiming there is no change to any rule, that what was inserted in a proposal dealing with commercial trucks was simply a clarification of the difference between "non-road" vehicles like dirt bikes and snow mobiles and "road vehicles".  The Clean Air Act prohibits the "tampering with or defeating the emission control systems" on road-rated passenger vehicles.

You will find confirmation of this in your car's owner's manual, such as this one in my manual 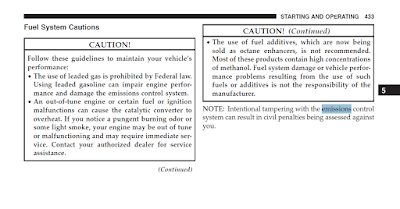 But SEMA's negligence is only a tip of the iceberg.  Why has the EPA done this, and why now?

The aftermarket racing world is microscopic compared to the auto-owning population of this country. Add in the number of car enthusiasts who don't officially race but do like to modify their cars, and you might reach the population of a thinly populated western state, but not much more.

So why is the EPA now looking to shut down a segment of our society by making an un-needed clarification of its understanding of a rule, which in turn would mean a deviation from its acceptance of the entire aftermarket automotive modification segment of our economy?

Well, the EPA is responsible for the enforcement (and modifications) of the CAFE standards.the Corporate Average Fuel Economy standards are the regulations set in place by the U.S. Congress in 1975 to force the fuel economy of cars and trucks produced for sale in the USA as a result of the Arab Oil Embargo.  Since then, the CAFE standards have been used by the EPA as a whip to force the automakers to design and sell cars that reach an ever increasing level of fuel economy and diminishing pollution levels.  I won't go into further detail on this; this article is not intended to discuss the pros or cons of fuel economy or pollution.

Rather, here's why I believe the EPA and the Automakers are in cahoots.

In April of 2015, both mainstream and social media outlets were abuzz with news that the automakers were attempting to strong-arm the Library of Congress to enforce the automakers' copyright of the software they use in all the vehicles they produce, under the Digital Millennium Copyright Act.  The Library of Congress is charged by the U.S. Congress with managing any exceptions to the Copyright Act.  Once such exception is to allow third parties to perform "...diagnosis, repair, and modification" to automobiles' TCM, PCM and other computer controlled components that have taken over the way cars operate.

The automakers have been very busy suing companies who crack these codes, claiming these companies are violating the automakers' copyright protected software; essentially "stealing" the intellectual property the car makers have created and installed (e.g. the computer software) to make their cars go.

While not an automaker, the farm equipment manufacturer John Deere went so far as to testify that farmers don't actually own the tractors they buy (at great expense) but rather only pay tens of thousands of dollars to receive "an implied license to operate the vehicle for the life of the vehicle".  John Deere even went so far as to claim that by letting people modify car computer systems will result in them being able to pirate music through the on-board entertainment systems....

...just think about the audacity of that statement.

Ford, Fiat/Chrysler, GM, John Deere and many more manufacturers also claim that if the exemption allowed by the Library of Congress is allowed to survive, it would allow vehicle owners to "tamper with emission controls, thus increasing the amount of pollution their vehicles produce", in violation of the Clean Air Act...obviously the automakers are just being "good corporate citizens" concerned about the public's health, right???

See where the threads are being connected?

For now, the automakers have lost, and they're pissed.  The Library of Congress in July of 2015 renewed the exemptions to the Copyright bill that, up to now, has allowed companies like Diablo Sport to crack the PCM code and develop custom tunes to sell to individuals who want to improve their cars' performance....and the automakers hate it.

Every year the automakers have to have their entire fleet of cars tested, and the total overall average fuel economy performance certified.  As the standards are increased, it becomes harder and harder for the automakers to justify building modern "muscle cars" as these V8 engines obviously aren't popular for their gas mileage.

So the automakers are under the thumb of the EPA; and the EPA wants to control greenhouse gasses as well as fuel consumption.  What better way for the automakers to curry favor with the EPA than to support clandestine efforts to stop you and me from customizing our cars using the software contained in them, than for the automakers being able to sue third parties who re-write their cars' software?

What better way for the EPA to curry favor with the automakers by reversing decades of interpretation and enforcement and suddenly start attacking the aftermarket performance vehicle world by shutting down the ability to convert a passenger vehicle into a race car?

It's a win/win for big government and corporate America...while we the owners of these vehicles who spend billions each year buying them, are left in the pits.

Here's a reading list:
SEMA fails in its primary mission
John Deere doesn't believe you own the vehicle you bought
Automakers are trying to stop you from hacking your car
Library of Congress releases DMCA exemptions