Last night I went down to SumerDuck Raceway in Virginia for its weekly Test & Tune.  Being that it’s early October, dusk was already settling in as I broke free from the choking traffic of Northern Virginia.  The trip should have taken only an hour and a half, but even with leaving at 4 pm it took me over two and a half hours to reach the 1/8 mile strip.

Darkness had fallen as I finally reached open roads and I was able to make time.  The evening air was cool and while it didn’t have the subtle bite of autumn air, some of the leaves on the trees were showing signs of color.  I opened my windows and let the cool rushing air wash away two hours’ worth of traffic-induced frustration.

The gates at SumerDuck open at 5:30, and in trips past there were usually a dozen or so street cars there at the very beginning;  folks with their daily drivers who, like me, enjoy learning the art of running on a strip and revel in the feeling letting their cars run to their potential gives them. 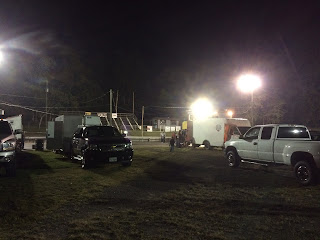 Last night however, I was the only daily driver there for most of the night.  Eventually a 2008 Camaro and what looked like a 2005 Pontiac GTO arrived and did some runs, but for the most part I was the only “stock boy” at the track.

I have no delusions about my driving skills; I need a LOT of work.  That’s why I attend Test & Tunes as often as I can.  I’ll write here exactly what I told folks I spoke with last night; my car is running fine; it’s the driver who needs help.

Remember what it was like for you in middle school or high school, when either you just moved to the area or were never part of the “in” crowd?  Remember when you would find yourself in a setting where everyone knew each other and you were the stranger, the outsider?

That’s how I felt last night, surrounded by guys (and kids) who have owned, driven and built cars for  more years than I have; cars that may look a little ragged, but even at startup announced they held power far, far in excess of what I was driving.

There was a white early 2000’s Corvette that only ran four times.  The first three runs either the driver missed a shift or the engine misfired; either way, it didn’t make it down the track in any kind of time commensurate with how it sounded rumbling slowly by, its cam loping like a mechanic’s symphony.  Oh, but that fourth run!  A perfect launch, smooth shifts, and at the end of only 1/8 of a mile, it was going 137 mph.

Or the bikes.  I’m not a biker.  I’ve wanted to be in the past, but fortunately that little voice inside my head made me be realistic.  The few times I’ve driven bikes I subconsciously knew if I owned one, I’d be killed by it.  I like speed too much, and in my youth I was rather reckless.

This night, more than a few of the bikes I saw hit speeds in excess of of 150 mph, with the fastest reaching 174 mph.  More power to those owners, and I enjoy watching them for the raw speed they exhibit, but that’s not for me.

Then there’s these cars.  Shade tree mechanics’ dreams.  Cars that at the time of their production may have been near the top of their mass market class, but nowhere near what their owners have achieved by working on them.

The 90’s Camaro; as a production car merely a faded shadow of what than name once was; now, it was a monster. 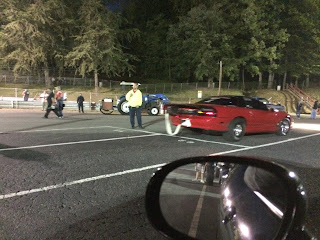 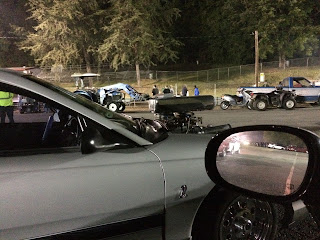 And proving that the original is always the best, a mid-60’s Chevelle SS, modified to become a car enthusiast’s wet-dream car: 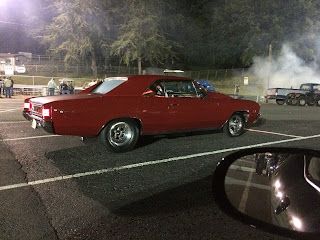 Some of the same feelings came over me last night as they did in my youth when I found myself in those awkward situations I mentioned above.  I just knew I was out of place with my “store bought” car; I just knew I didn’t stack up in terms of mechanical knowledge in comparison with the other owners.  And I coveted what the other drivers had, both in terms of the mechanical pieces of raw powerful art and driving skills, as well as the sense of belonging I saw in their interactions with the other drivers.

But, with age comes wisdom, perspective and acceptance.  I’ll never become as mechanically trained or gifted as most of those guys nor will I ever have the kind of investment in terms of time and money they have in their cars, and I’m okay with that.

What I am becoming however (albeit slowly), is a better driver.  And, by the end of the night, I was becoming part of the crowd.

The owner of the Mustang pictured above rolled down his window as we sat side by side awaiting our turn to run and said “Just let her out…”.  He laughed and nodded his head in acknowledgement when I confessed my shortcomings, and then gave me the magic word as advice: “Practice”.

After a few mediocre runs, and as I pulled into the staging lane, the starter came over and gave me a couple of tips, which helped me achieve my best times of the night.  When I told him I was taking my last run, he nodded and said “…expect I’ll be seeing you here again.”, not as a question, but a statement of fact.

And he’s right.
Posted by Unknown at 5:42 AM No comments:

This is not a “fire Tomlin” piece.  But somebody needs to wise Tomlin up to the fact that he needs to learn to manage games better, because his “gut instincts” are gutting the Steelers chances for a successful season.

(previously submitted to Behind The Steel Curtain by author)

Let’s get this out of the way up front:

Yes, if Antonio Brown makes the catch in the end zone late in the game, the Steelers win.  It’s that simple.

Plays failed, Brown dropped that touchdown pass that he usually makes because that’s what a player of Brown’s caliber does.

But neither Brown or even Scobee deserve to be blamed for this loss.  That falls squarely on Mike Tomlin.

Steelers Head Coach lost this game for the team by violating a very basic tenant of coaching: Never set your team up to fail.  Never.

Here’s the two key plays of the game that my mind best illustrates how Tomlin’s lack of mastery of coaching strategy is hurting the Steelers:

12:37 left in Overtime, the Steelers facing fourth and two at Baltimore’s 39 yard line.  Tomlin elects to go for it, and that’s what doomed the Steelers.

9:45 left in Overtime, the Steelers facing fourth and one at Baltimore’s 33 yard line.  Tomlin elects to go for it, and that’s what doomed the Steelers.

Yes Scobee proved to be unreliable this night.  But so did the Steelers’ offense.  Trickery can only get you so far; if in the first OT fourth down go-for-it situation Tomlin was thinking “…the Ravens are thinking handoff to Bell…let’s have Vick bootleg it” then he was sadly mistaken.  The Ravens were waiting for Vick.

In the second OT fourth down go-for-it situation Tomlin was thinking “…let’s get it to Brown”, then under normal circumstances you might say that was the obvious choice.  Except this night Brown already had dropped a TD pass in the end zone, and for the night Brown was held to five catches for forty two yards; not a high percentage play after all, at least this night.

So, what was Tomlin to do you ask?  How about punt?

Think about it.  The Steelers’ punter Jordan Berry wasn’t having a great night, having pooched three punts under 40 yards (39, 38 and 32 yards)….but that’s all the distance they needed in OT!

Tomlin forgot all about a facet of the game: field positioning.  Had he punted on their first possession of OT, at worst the Ravens would have gotten the ball on their twenty yard line instead of their 39 yard line.

Had he punted on their second (and last) possession of OT, at worst the Ravens would have gotten the ball on their twenty yard line instead of their 33 yard line.  This one was the killer.  Remember, there was 9:45 left in OT.  Had the Ravens been pushed back 13 more yards, and given their production of 4.2 yards per play in this series of plays, and given the way the defense had been playing (one play for negative yards, one for zero yards, two for three yards) there would have been more opportunities for the Steelers defense to make something happen; more space with which defensive head coach Keith Butler could have used to either blitz Flacco yet again in an attempt to force an errant throw…something, anything that would have forced the Ravens to react to the Steelers’ controlling the field rather than the Ravens.

Somebody, maybe GM Kevin Colbert, or Mean Joe Greene, or Dan Rooney himself needs to pull Mike Tomlin aside and tell him that it’s time to stop “going with his gut” –  I cringed when I heard the announcer report this is what Tomlin told them in their interviews leading up to the game.

Someone, please, anyone, needs to shake the “I’m smarter than you” smirky attitude Tomlin exhibits and make him stop managing like a gambler and start thinking strategically like the best coaches do…yinz know, like maybe Bill Belichick, Chuck Noll, or other head coaches who studied the nuances of the game and understood real football strategy, and were rarely gutted by their own tactics.
Posted by Unknown at 6:26 AM No comments: