From Conception to Execution: The evolution and realization of a Retro Mod - Part I

PART I: The Genesis of an idea

I'm a child of the '70s, but missed participating in the first American Muscle Car era.  Sure, I had a 1969 GTO 400 ci 4 barrel....for all of three days until the engine blew up and my Dad wouldn't let me sink any more money into it (or time, or take up space in the driveway with a car on blocks).  Sure, I had a 1980 Camaro Z28, but that car was but a shadow of its predecessors.

I've always loved the "muscle car " look, and consider side pipes the quintessential component of a muscle car, but for full disclosure, I never really liked the typical MOPAR side dump look.  Growing up, most of the time it looked like (and most often was) a rusty exhaust pipe with a cheap chrome tip hung by hanger as it dangled underneath the chassis.  It looked too "red neck" for my tastes. 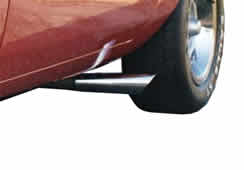 No, I've always admired the look of side pipes coming from behind the front wheel to terminating just before the rear wheel; the Corvette look; the Cobra look, and on many of the true Muscle Cars of that first era, the Mustangs, Camaros, Firebirds, Chevelles and the like, a well proportioned side pipe just gave an already tough looking cars a meaner, squatter look.  A look that gave gravitas to the car's overall image; a powerful predator stalking the blue highways of America.

Flash forward to now; of course of all the "retro muscle cars" still being produced, it was naturally the Dodge Challenger I gravitated towards, for it alone out of the other two: the Mustang, and the Camaro, the Challenger is truly a modern interpretation of that bygone era.  The Mustang has
become too "europeanized" while the Camaro's image has been sublimated by the Transformer movies from where it was first revealed.

No, it was to the Challenger I turned, and I have been loving it without any second thoughts.  But I've never forgotten how much I liked the full retro look, and have been puzzling my way through how to express that look on today's Challenger template.

My desire to capture that look moved suddenly from an idle day dream to a full time "I gotta figure this out" itch once I laid eyes on a George Barris 1968 Plymouth Barracuda.

George Barris was the king of car customization in the 1960s and early '70s, and he designed many of the cars you and I grew up drooling over on television; cars such as the original Batmobile, the "Munster Koach" and the "Drag-U-La" drag racer from the TV show "The Munsters"as well as the "Black Beauty" from the Green Hornet television show.

But it was the 1968 Barracuda that captured my attention.  I came across it at a car show in Culpepper VA in 2015.  Apparently this car is only one of four known remaining cars that had the "Barris Barracuda" body kit installed by the selling dealership.  This kit came with fake side pipes, and it was these side pipes that started me off on this journey.

The Barris pipes were actually a rocker panel cover for the Barracuda; the "pipes" were in actuality half-pipes, with faux inlet and exhaust openings (there were other modifications as part of the kit, but I was only interested in the side pipes).

From a distance, the pipes looked real.  Here, finally, was a Mopar product with what I considered "true side pipes", at least in appearance. 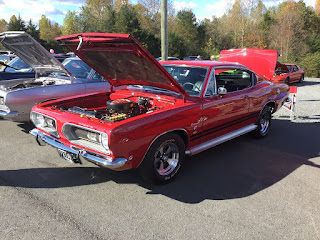 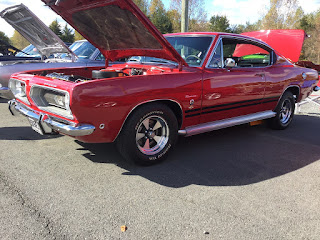 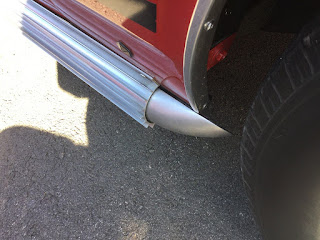 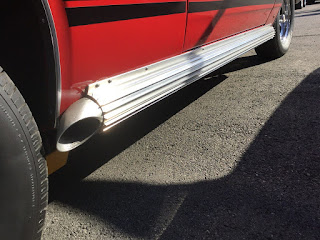 From that day in September onward, I obsessed with trying to do something like it.  However, today's Challenger rocker panels have a serious gradient change from top to bottom, so no matter how I designed a similar panel, it never looked right.

I made drawing after drawing, cut mailing tube after mailing tube, taping them to my rocker panels in a vain attempt to come up with a definitive design.  When I finally did however, another obstacle presented itself.

As you can see from the pictures above, the "pipe" has full length fins.  This entire panel is made out of extruded aluminum.  When I began querying metal fabricators, they all said the same things: (1) the only way to get fins that long to remain straight the entire length is to extrude the whole piece, and (2) that was going to cost A LOT OF MONEY....and they were right.  Of the handful of shops willing to take on such a project, the average cost for the prototype mold itself would be $2,500 to $3,500 plus the cost of the metal itself.

This obviously was a non-starter for me.  Undaunted, I scrapped the idea of a true replica and began designing a full side pipe made out of aluminum tubing and fins.  But (and isn't there always a "but"), yet another factor came into play.

By this time, the 2015 car show season was over, and looking back I realized I had accomplished quite a feat:  I had won some major car show awards, primarily based on the foundation of a consistent and authentic theme (the "Steel Curtain Challenger"). I had won First Place at Moparpalooza, Third Place at the Chrysler Nationals in Carlisle, and First Place at the TMC "Mopar Madness" shows, as well as several others.  Each of these shows give great weight to performance as well as looks, and fake pipes might actually detract from the authenticity of what I had created (posting my time slips however poorly I had driven was proof to them I was as focused on performance as I was on appearance).   To retain that authenticity of the Steelers' theme from the 1970's, and in keeping with the 2015 Challenger paying homage to the 1971 Challenger, fake side pipes just wouldn't cut it.

With that in mind, to make these pipes functional meant I couldn't use aluminum, since at some point the car's exhaust would have to be piped in, and it's far too complex of a job properly welding aluminum to stainless steel...

...back to the drawing board, again.

(to be continued in Part II)