I attended a car “meet up” this past weekend.  This was a “Cars and Coffee” type event where car enthusiasts gather for a couple of hours to show off their cars and admire those of other enthusiasts.  These are great events to attend for the opportunity to look up close at such exotic vehicles as Lamborghini and Ferraris as well as “old school” muscle cars and Rat Rods.  This isn’t a car show where awards are given; instead, it is a gathering of people from all walks of life who share a common love of cars.  The types of cars garnering such enthusiastic devotion are as diverse as the car owners themselves.

A chance encounter with two such enthusiasts stood out to me in such stark contrast to what has been filling the media these past few months that I feel compelled to write about it here.

Unless you go through life like an ostrich with your head buried in the sand, or have been living in a cave until recently, you like me have been bombarded with stories in the media (print, broadcast, social media, the blogosphere, etc.) about race relations. Whites killing blacks; black and white policemen killing blacks; blacks killing blacks; police killing civilians; the Confederate Flag and what it means to blacks, to southern whites, to people anywhere and everywhere; demonstrations turning into riots over civilian deaths, etc.  The list goes on and on, with a common denominator of race vs race.

We’re being bombarded by reports of what separates us.

What I witnessed at this past event showed me in the most basic terms, what unites us.

Two men, complete strangers to one another; one white, one black.  One a Pittsburgh Steelers fan, one a Dallas Cowboys fan; one loves Dodge Chargers, the other Ford Mustangs.

On the surface, there is almost zero common ground for these two individuals.  Right from the start, their race supposedly separates them.  On top of that, add in cars and football?  Other than politics and religion, there are no more polarizing activities individuals can engage in than cars and football.  Fans of all walks of life live and die each and every Sunday as their chosen football team battles it out on the gridiron against “them”, the “other guys”.  The ones wearing different colors than “our team”; the ones from “not around here” who dare to come to “our house” and threaten the success of “our team”.  The bitter rival, the vastly inferior team if not by record, then by the character deficiencies of the organization, the head coach, the star player.

And cars?  Fuggetaboutit.  Go on any car related forum, attend any car show, cruise any meetup and invariably someone will make a snide comment about “…those girlie Ford drivers…” or “…those rice loving import owners”, or “…corvettes are for white mid-life crisis males…” and so on.  Much of the personalization of cars today (a/k/a “mods”) such as extreme wheel sizes, stretch tires and overly cambered wheels,  LED light kits that make the cars look like Times Square at night, sub-woofers that fill entire trunks, reflect the tastes and esthetics of various racial and ethnic cultures.
So what happened at this chance encounter?

I was standing in front of Renny (my car) with one of the individuals (I’ll call him John) when the other approached (I’ll call him George).  George and I had run into each other at a previous event and he recognized my car and came over to say hello.  John and George had never met, and George saw John’s Dallas Cowboy shirt and of course (being guys) some good natured smack talk ensued.  We chatted for a few minutes, as George mentioned the car he brought to the meetup.  John said, “…let’s go take a look” and the three of us went over to look at George’s Mustang.

George popped the hood of his car and soon he and John were discussing car stuff; performance on the road, modifications George was thinking of, etc.  I stood by listening, occasionally making a comment or two.

Then George said something to John which made John think for a moment, then start looking closely at George’s car and pointing out aspects of it George had no idea about.  Next thing you know, George grabs a tool kit out of his trunk and he and John are elbows deep in George’s engine bay taking things apart and swapping technical jargon as John removes a part of George’s air intake in order to improve his car’s performance.  George starts his car up and almost immediately smiles, recognizing an improvement by the sound of the engine, and John was smiling because, as he put it: “…I forgot how much I like to get grease on my hands…”.

Pretty mundane, or silly to talk about right?  Not really.

Because, in period of time where everyone is caught up in blaming others (the police, the whites, the blacks) for whatever real or perceived things “they” are doing to “us” it was the fact that such a banal and simple thing as one stranger, with all the reasons to separate himself from the other as I’ve described above, not stopping to dwell on such things but instead reflexively imparting knowledge and assistance to a complete stranger and apparent “other” solely on the basis of their common ground of their shared love of fast cars. 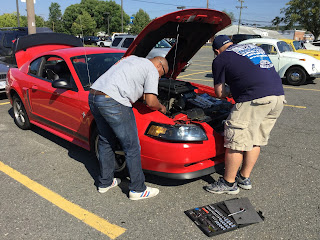 George probably left the event happy, knowing his car’s performance was improved, and I bet he never even thought “by a white man”, but by a fellow car enthusiast.  John probably left the event happy, having tinkered under the hood of a car and improved its performance by the dint of his knowledge; not a black man’s car, but a car owned by a fellow car enthusiast.

Go ahead and bash me for trying to make far more out of this than it deserves; I don’t care.  After months and months of hearing nothing but racial based anger and strife in each and every form of media that surrounds me, I’m taking comfort in what I witnessed.  Comfort that there still exists two individuals who meet and treat each other on the basis of the grease under their nails and the knowledge in their heads, and not by the teams they cheer for, the cars they drive, or the color of their skins.

Does this one small event solve our country’s racial issues?  It could.  It could if you and I comport ourselves as these two gentlemen did and use whatever common ground we share with strangers as the basis upon which we interact with them.  It could if we demonstrated such behavior to our family and friends, and then they demonstrated the same to their families and friends.

The journey of a thousand miles towards a better society can begin with just a simple shared turn of a wrench.
Posted by Unknown at 6:26 AM