I spent a hot but fun day this past Saturday at the 4th annual Annapolis Car show, hosted by Koons Ford of Annapolis.

I must admit I was a bit skeptical about attending a car show on a car dealer's lot; I had visions of packs of wandering salesmen hunting me down and pressuring me to look at their latest model, or swarms of fanny-pack wearing dads letting their ill-mannered progeny climb into the show cars or run their sticky fingers all over meticulously cleaned paint.

But I was pleasantly surprised; impressed in fact.  There must have been close to 100-150 cars laid out in rows, and man what cars!

This show attracts some heavy hitters in terms of restoration, modification and even survivor cars. To be honest, my 2015 Challenger was out of place in a show filled with Daytona Superbirds, chopped top Fords, a 1937 Chord and others.

But the show also filled me with remorse; sadness not just for a bygone era but also the dehumanizing loss of....of a man's soul poured into his car by his craftsmanship, his artistry.


Don't get me wrong, I had fun, and I had my car looking pristine (until the grease filled smoke from the barbecue they had us park next to bespeckled my paint).  I met a lot of nice folks, had some great "car talk" conversations, and despite wearing the Black n Gold colors of the Steelers deep in the heart of Ravens country, received many compliments on my car's theme.

Many folks (including my wife) don't understand car shows.  They don't understand how a 5 hour show can last 8-10 hours.  They ask: "...what do you do all day?  Isn't it boring just standing around on a hot parking lot?"

First, it's the CARS!  Muscle cars from my youth; limited production (or surviving) cars; boulevard cruising cars from the '50s, '40s, '30s (and older); exotic cars I would otherwise only see in movies....how could you NOT spend hours walking around and appreciating the work and care that went into preserving these cars?

What you see, if you're willing to look, is an era of American manufacturing design that has all but disappeared.  These older cars, whether they be American Muscle or not, had character.  They had elegance of design.  Their contours bespoke of artistry, not merely functionality. 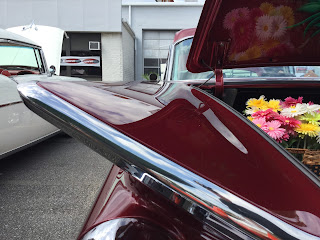 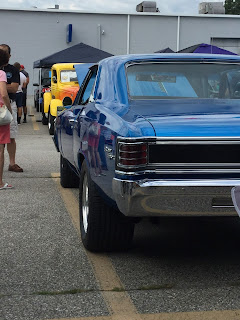 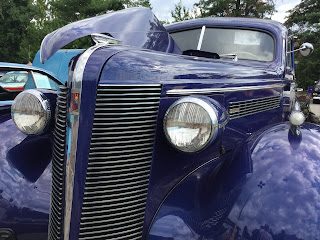 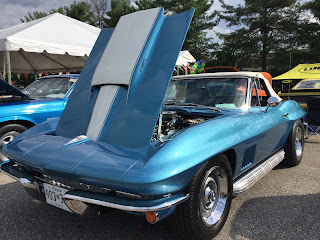 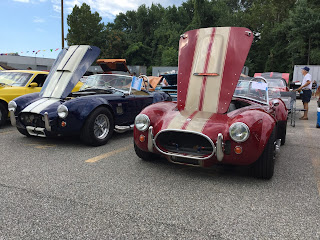 Name a mass produced car built in the last 20 years whose body lines had such character and grace, or bespoke of power and speed.

Granted, if you have the cash to afford them, you can find such cars today, but these exotics are out of the reach of all but the few (or those willing to mortgage their lives for an automobile) 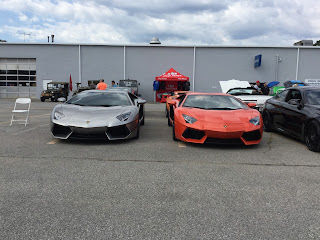 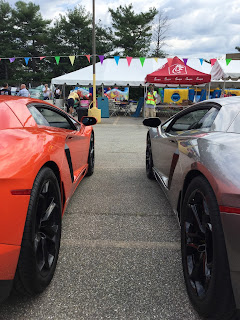 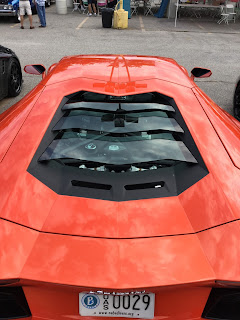 It's not just the exteriors that have for the most part lost the element of artistry and craftsmanship.  As much as I like what I've accomplished in modifying my engine bay (see first pic below), it is nothing, NOTHING, compared to what once roared down the back roads of America. 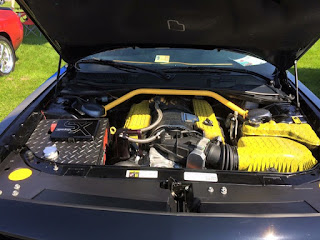 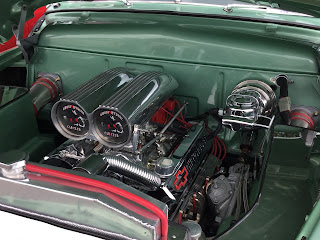 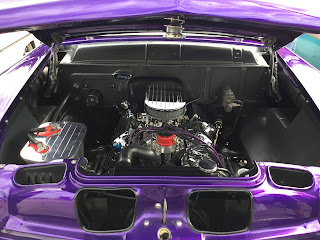 I mean, c'mon!  I can dress my engine bay up with theme'd decorations, but the heart of my engine's performance is hidden in the nano-sized world of the computer chip housed in its PCM.  Even if I were to supercharge my 392, and even if the supercharger was all shiny and chrome, the engine would blow up without a computer programmer's work.

Just look at the last two pictures; these are prime examples of the initial imagination, the trial and error and finally the achievement of shade tree mechanics, of (mostly) men sitting in the pits of dirt and asphalt tracks throughout the country, of that tinkerer in his barn thinking, experimenting with "bolt on" parts to try and gain that extra horsepower, speed and torque out of his car, simply by bolting on part. Place an Edelbrock mid-rise to a 327 ci engine, stack on two Holly four barrel carburetors and top them off with a blower,and POW! The kid in high school who was always sitting in the back not paying attention to history or english, but instead dreaming of speed, has on his own, between part-time jobs and chores, built himself a rumbling, loping CAR - not a "means of transportation", but a real life, fire breathing CAR.

Today such a kid is in his parent's basement learning computer coding.  And that's okay to an extent, because of all those computer geeks in the world, there are those few in whose blood still runs the desire to go fast, to power a car beyond what the jelly bean making, cookie-cutter auto designers of today force feed the masses.

But that kid of old, who kept his car covered in a grease-stained tarp behind the house; or that old man with the detached garage he spent hours in tinkering, those folks are a dying breed.  Grease permanently under their nails, hands scarred from hot exhaust manifolds and bolts that wouldn't lossen...they're being replaced by the computer guys who while nonetheless spend no less time at their craft, somehow don't elicit (at least in me) feelings of awe and envy.  I wanted to be that kid working late into the night, with my arms and head scrunched into an engine bay, grease up to my elbows, sweating and cursing my car's obstinance at yielding to my efforts yet nonetheless enamored with what I was creating...

...instead I'm that guy who has to search high and low for a performance shop that understands binary code as much, if not more so, than how to calculate the proper degree of lift on a custom grind cam.

Our cars today are faster, both in straight lines and on the twisties, and safer than the older cars; but what part of our soul have we given up to achieve this?