Another Sponsor teams up with the Steel Curtain Challenger!

We're excited and proud to announce that Billet Technology has graciously agreed to sponsor me and my Steel Curtain Challenger!

Founded in 2006, as a spin off brand of Vertex Precision, Inc., The Billet Technology Brand was founded on these core principle:

Billet Technology is owned and operated by folks who are true car enthusiasts first, who understand and share our love of muscle cars.  Heidi, Nick and all the folks at BT care deeply about producing and selling quality products that they themselves would be proud to own, and this becomes readily apparent when you contact them.

Whether it's a one-off single item order or a huge bulk sale, Billet Technology will provide you with top quality products backed by impeccable customer service.  I'm not just saying that, I experienced it well before any thought of sponsorship was mentioned.

With this year's car show and race seasons winding down, I'm sure I'm not alone in planning additional upgrades and modifications for next year.  I would encourage you to check first with Billet Technology for whatever you're planning for your ride.  You won't regret it.
Posted by Unknown at 10:56 AM No comments:


We're excited to formally announce a new sponsor has teamed up with us as we strive to ever improve the Steel Curtain Challenger! 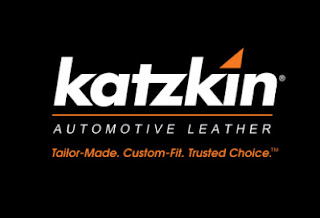 The sponsorship, one of only 120 granted nationwide by Katzkin in any given year, was awarded shortly after our surprising success at the Carlisle Chrysler Nationals where we took 3rd place in the 2011 and up Modified Challenger and were selected for one of the few but highly coveted Sponsor's Choice Awards.

After countless hours of examining the multitude of types of leather, colors, options and configurations and numerous emails back and forth, we finally arrived at what we believe will be a killer combination.

None of which would have been possible without the world class quality of products Katzkin offers, nor without the top notch (and extremely patient) customer service from our Katzkin Program Manager.

In their own words: "Katzkin is proud to be the only tested and authorized genuine leather interior supplier for the entire family of Fiat-Chrysler Automotive."

In other words, if you want a true top quality leather interior for your car, it's "Katzkin in your Mopar, or No Car"!

Not just a pretty face or trailer queen

This Friday, September 25th marks the one year anniversary of my crossing off an item from my bucket list.  A year ago this Friday I took possession of my 2015 Dodge Challenger.

First and foremost I want to thank my wife for her support, patience and understanding, for without all three (okay Baby, a little more patience would be nice) this experience would not have been either possible, or so enjoyable.

It’s been a year full of making new friends, meeting people from all over the country, and learning both how much things have changed since I last was immersed in the car culture, and how much has stayed the same.

I’ve driven 11,817 miles so far in Renny, my Steel Curtain Challenger (but who’s counting?) and have travelled as far south as Charlotte, NC for a car show, with another long trip scheduled for this Friday to New York as well.  In those miles, I’ve reconnected with the sheer joy that driving can be, and have multiplied that joy a thousandfold by taking my car to the strip to legally (and in compliance with my warranty) to run my car the way Dodge built and intended it to be run.  Fast.  Not really fast yet, but that’s my fault, not the car’s.

You see, cars aren’t just mode of transportation.  They are, or can be, extensions of the owner’s personality.  Too many people have lost the connection between driving and getting some place.  Some have diminished car owning down to simply wearing the price tag as a status symbol; others have made ownership an extension of their conservancy beliefs.  To the former who have always existed to one degree or another, I take pity; to the latter, I can respect these folks for walking their talk, as long as they get out of the left lane.

The price-tag pimps deserve pity because they’ve stripped the souls out of their cars.  To them, what’s important is throwing into other people’s faces how much money they have.  News flash guys; there’s always somebody with more money who will trump your car with an even more expensive model.

Of course you get a similar defect in car enthusiast themselves.  The Best of Show winner in a recent event was a 1970 Plymouth Road Runner with an insanely built engine that never sees the road.  It’s strictly a show queen.  The owner has added a high-rise manifold with dual 4 barrel carburetors and racing slicks, but trailers the car from show to show and puts it up on stands.

Not for me, and not for Renny.  She’s never going to be just another pretty face.

Yes, I’ve “dressed her up”.  I’ve made and bought modifications to her, to make her one of a kind.  But, some of those mods are performance related (Barton shifter, Mopar Stage 1 springs, Petty front strut brace) that are just the cornerstone of what I’m planning to do over the next few years.

Yes, I’m taking my car to shows; I enjoy the events, the people and their reaction to what I’ve done so far.  And I’ve been relatively successful.  Seven awards in eight shows, with only two shows where I’ve driven away empty handed.  Some of my wins have been major ones; at MoparPalooza 8 in Virginia (a major regional show) I placed First in Class for 2015 Challengers, and at the Chrysler Nationals in Carlisle, I placed Third in the 2011 and up Modified division and received a Sponsor’s Choice award.

Am I seeking recognition or validation?  Maybe a little.  Who doesn’t enjoy acknowledgement of their vision and hard work?  But I'm also trying to create something; call it performance art in a way, and I think it's working.  My awards indicate that it is, as does the partial sponsorship I've just received (more on that in a subsequent post).

But Renny is more than just a pretty face; the "why" I elected to purchase a muscle car is based far far more on performance than just appearance.  I’ve run her over 30 times at Test and Tunes, albeit unfortunately only on street tires so far.  I scored my personal best this past weekend on the ¼ mile track at Virginia Motorsports Park at the Tidewater Mopar Club’s Mopar Madness event with a 13.73 @ 105.98 mph (don’t laugh, street tires, remember---and a newbie driver).  I also took first place in the Modern Challenger – Wild class in the car show component. 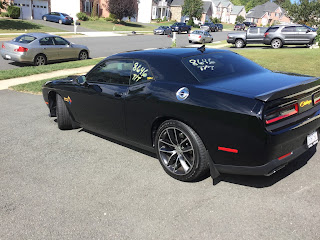 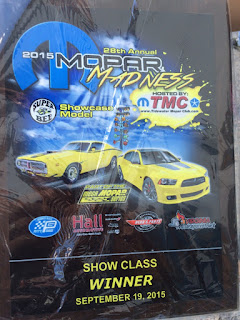 My car is an extension of my personality, and my interests.  I’m a diehard Pittsburgh Steelers fan; a member of Steeler Nation from birth.  And I love to go fast, to feel the thunderous roar of a powerful engine under my control following my commands.  The way my car looks, handles and performs is a reflection of my tastes and an extension of my body and who I am as a person.  It’s a chance to both step outside myself, and at the same time immerse myself  in what speaks to my soul.

As Dodge likes to advertise; if you get it, you get it.
Posted by Unknown at 5:51 AM No comments:

Death of a Legend, End of an Era

Last night Steeler Nation paid its last respects to a legend.  Last night, the final irrefutable evidence of the end of an era was witnessed.

I’m not talking about the fact the Steelers defense gave up 28 points to the New England Patriots in Foxboro before a national audience.  Or how the Patriots amassed 361 total yards, or scored four passing touchdowns.  I’m not referring to any of the game stats themselves, for even at the height of whichever era of Steelers defense you most associate with the team, there were games where they gave up such stats to top tier QBs or opposing offenses.

What I’m talking about is the death of the legend of the Steelers defense.  You remember that legend don’t you?  The part where teams may defeat the Steelers, but they’d walk off the field at the end of the game bloody, bruised and battered.  Where the Steelers defense made opposing offenses pay in blood and sweat for every yard and point made.  Where quarterbacks had to prove they could scramble and juke to their left and their right because they never knew from where a devastating hit was coming.  A defense that may not have always prevented the opponent from scoring, but made them work for it.

Where the talented and high caliber offensive opponents raised their own game to such a level that for those in Steeler Nation who loved the pure essence of the game, watching such an offense defeat our defense engendered respect and admiration; we were witnessing potential championship caliber performances, and relished such conflicts, because after all, Iron Sharpens Iron, right?

Well that Steelers defense is dead. DED.  What Steeler Nation witnessed last night, what all of the football world witnessed last night, was a travesty and a mockery of a once proud Steelers defense.
A travesty because series after series, we witnessed discombobulation in our secondary as they prepared for the snap of the ball.  Play after play, one Steeler player or another was waving his arms or looking around, trying to figure out who was supposed to go where.  Play after play, one Patriots’ playmaker or another, Rob Gronkowski, Danny Amendola or Julian Edelman, was left virtually uncovered and allowed to slip between the seams and gain huge yards.

A mockery because what we saw on the field in Foxboro was not a Steelers defense I or anyone in Steeler Nation should be able to recognize.  Against three (yes, count ‘em, three) rookie offensive linemen, one of which playing center, the once-vaunted Steelers pass rush was invisible.

Granted, Tom Brady never holds the ball long, and his “bread and butter” is quick strike passes, but he was rarely pressured by our front three of Steve McLendon, Stephan Tuitt or even Cameron Heyward.  You remember them right, even though you rarely heard their names mentioned the entire game?

Granted, the Steelers had two sacks, one of them by our own rookie Bud Dupree (the other by Will Allen), but against a rookie center that’s it?  A rookie linebacker (blind squirrel finds nut) and an aging safety were the highlights of our defense?  Yes Ryan Shazier made some penetrations and some nice hits, but where was the vaunted Steelers linebacking corps most of the night playing against three rookies? They weren’t pressuring Brady, nor even collapsing the pocket and making him scramble.

Yes, the legendary Steelers defense is dead.  Worse though, given the disarray evident play after play by the defensive corps, the waving of arms, the blown coverages, and at one key point with the Patriots around the 30 yard line only 10 players on the field for a play, the coaching of fundamentals, the preparedness Steelers defenses are were known for was nowhere to be found and presumed dead as well.

After five pre-season games, and the entire training camp period, the Steelers defense conducted itself in front of a national audience in the home of a hated opponent, from coaching on down to player execution, as if it were presenting a satirical caricature of itself.

The legend is dead.  All that is left is a bunch of empty uniforms to remind us of what once was.
Posted by Unknown at 6:04 AM No comments: