Santa (my wife) was good to me this Christmas and delivered a dash cam for Renny, my Steel Curtain Challenger.

I also wanted a dash cam that could replace my daughter's Go-Pro I have been using at the track.  She's been accepted into the Peace Corps and is shipping out in April, and I fully expect her to take her Go-Pro with her.

After a great deal of research (who knew there were so many blog sites and forums dedicated to dash cams?) and feature/price comparisons, I decided on the BlackSys CHB-100 B.

HINT:  Blackboxmycar.com is one of the most professional and thorough websites I've found for both learning about and purchasing a dash cam.  I read their reviews on both the  Blackvue DR650GW-2CH and the BlackSys, and while they hold the Blackvue as the reigning premium dash cam, they said the BlackSys is in every way comparable, but at a better price. 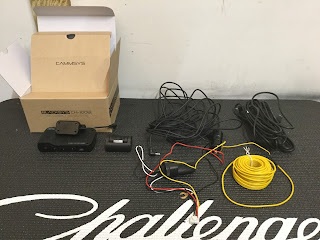 As you can see in the back row of the picture above, you get more than enough cable to install these cameras.

Starting on the left, front row:  A Moto Park "Multi-safer" hard wire kit (control module not shown), and yellow 18 gauge electrical wire.  Yellow for an installation reason, not because the Steelers are "Black & Yellow".

DISCLAIMER: I am a DIY "Jack of all trades, Master of none" kind of guy.  I have no electrical training, just hands-on experience, which has gotten me into trouble in the past.  Real electricians may scoff at my approach, but my car hasn't burned up (yet) and everything I've installed still works...so take the following with a grain of salt and think things through for yourself.

Installation was overall quite easy.  I had one problem that stumped me for a while (I'll mention it at the proper point in this narrative), but this is definitely a job you can do yourself.

The BlackSys 100-B 2 comes as mentioned with a cigarette plug, but I didn't want cords hanging, and I especially wanted the camera to run when the car was parked, but I also didn't want it to drain my battery.  This required the Moto Park "Multi-Safer" which allows you to set a cutoff baseline both with voltage (I chose 12.2v) and time (I selected 6 hours).  This device also allows you to manually turn off the camera with a push of a button.

First, I soldiered the yellow 18 gauge wire spool to the hard wire kit's wire harness.  The vast majority of dash cameras use yellow wire for the B+ or battery powered source; it's always on.  Red is typically used for the Accessory power source, which is on only when engine is on. 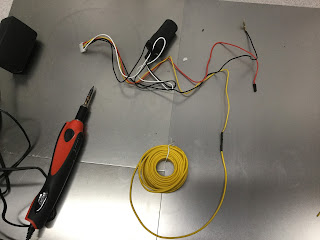 Because this is a car-related project, I always solder electrical connections, taps, splices, etc.  No matter what car you drive, everything bounces and jostles to one degree or another, and soldering is the only way to ensure a solid connection.  I also use heat-shrink tubes to further protect any connections. 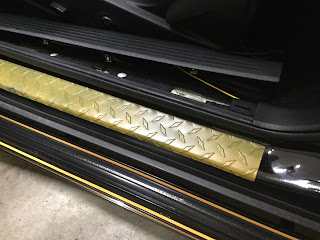 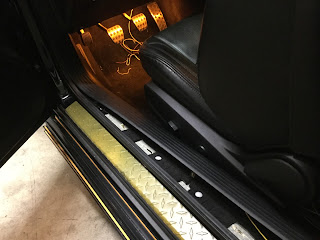 Third, I lowered both back seats, and emptied out my trunk, removing the carpeted floor and the black plastic woofer-delete box that holds the tire pump and fills the bottom of the trunk well.  This allowed me to gain easy access to the entire trunk area (I'm 6' tall, weigh 225 lbs and could sit easily in the trunk).  From the back seat area I elected not to loosen or remove the B Pillar or C Pillar plastic trim; I felt there was enough play along the edge that I could push and tuck the wire into invisibility.

Once I got into the trunk area, I climbed out and worked from rear.  In the first picture you can see the plastic trim tool I mentioned; it's pointing to the left-most carpet pin which I used as a "pivot post" to turn my wire 90 degrees to run it across the width of the trunk to the passenger side where, ultimately, it came to the fuse box. 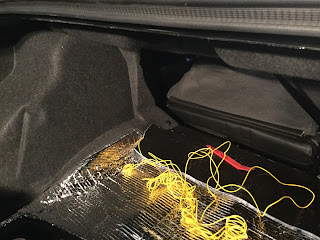 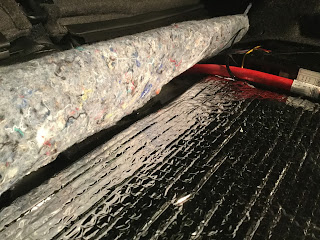 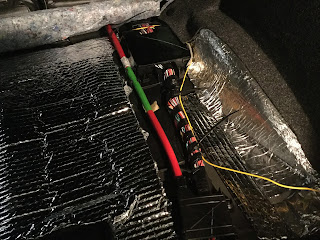 HINT: In the 2015+ Challenger Scat Packs (and presumably all Challengers), Fuse #12 - 20 Amp - Power Outlets (selectable) is factory placed in ACC position (Accessory) but has the capability of being moved slightly to become a B+ fuse, meaning always powered. 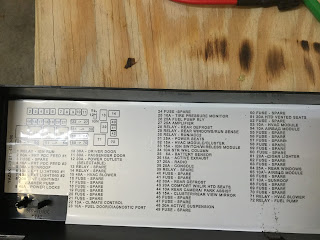 I pulled Fuse 12 (noting the direction it was facing); I then took an "Add-a-Circuit" fuse tap and inserted it into slot 12 and partially replaced the fuse box cover and marked its position.  I then dremeled a slot for the fuse tap to stick through, allowing me to later fully close and secure the fuse box cover.  Along the way, I zip-tied my yellow wire to the existing wire harness to secure it.

HINT: Fuse taps typically come with a butt-clamp (blue tip at end of red wire in picture below) connection with which to splice your wire into it.  I have never trusted these, especially when splicing a smaller wire (higher gauge number) into it.  I cut mine off, cut my yellow wire to length and soldered the two together. 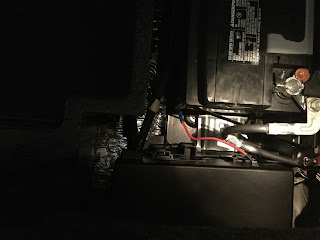 Fourth:  "The Hunt for a Ground Connection"...Frankly, this was the second most troublesome portion of the job. There is no decent ground connection under the driver side dash!  Oh, there was a Parking Brake bolt, but reaching it was a b*$%! (I was so contorted trying to loosen this dang bolt that when I sneezed, I pulled a rib muscle).  This is where my lack of tools and electrical knowledge first slowed me down.  I finally found an old multi-tester but it was broken, so I had no way of testing for a ground.  That and the entire inner surface of the footwell (beneath the carpet) is rubber coated and most of the parts under the dash are plastic.  I have no Tip for you as to where to find a ground.

I had one from when I pulled wires in from the engine bay to power my cutouts, so I tapped into that one.  Let me tell you, laying across the door sill with a pulled rib cage while gently shaving the plastic coating off a crucial wire with an xacto knife is no picnic.  But that's what I did...you'll have to find a ground wire on your own....Sorry.

Fifth, I pulled the fabric trim panel off underneath the dash; it has two push pins that need a steady but firm tug to pull them out.  From there, I routed the length of my yellow power wire that I earlier stated I had left there, behind the 3 pedals (mine's a manual, remember) and parking brake.  I've tucked all these wires up behind the radio head unit; the fabric panel will catch them if somehow they bounce and jostle from there.

From this point, it's time to figure out camera placements and run wires underneath the headliner (oh, goody!).

Actually, this was the easiest part.  The BlackSys comes with a wi-fi program for smartphones; this allows you to stream live shots from the camera.  I used this nifty function to aim the cameras and mark on the glass where I wanted to mount them.  I cleaned the glass, applied 3M double sided tape to the cameras (mine's black; the unit comes with a light gray tape that I felt would be more noticable; I'm going for the stealth look), and affixed both cameras (pics at end).

With the cameras mounted, I plugged in the cords and began tucking them along the top of the windshield, behind the A pillar (windshield edge) trim, (1) for the front camera down the A pillar, behind the dash and door trim pieces, and then zip-tied it to the yellow power wire underneath the dash; (2) for the rear camera cord, and up underneath the headliner where it runs across the door opening, then again behind the plastic trim of the B and C pillar, then behind the headliner across the top of the rear window.  While I'm thankful for the (more than) sufficient length of rear camera cable, it was a bit of a chore stuffing all the extra wire inside the headliner....but better that than being 8 inches too short!

Now back to the wiring......SIDE PROJECT: Those of you who've seen my car know I have my cutout main switch under the dash near where my right knee goes;  it is a lighted rocker switch.  Up till now, I've always been bugged by how loose it's sat, even though I used 3M tape to affix it to the lip of the plastic dash trim.  Here's why:  that lip is only about 1/2" wide and the rocker switch is all of a full inch or a little more, meaning, not much of the switch is actually attached to the trim (I really don't want to be drilling holes in my dash for switches).  Thus, I took this opportunity to craft a small plexiglass bracket from a scrap piece I had laying around.  I simply cut it to the size of an index card (3x5) and marked a "bend" line about 2 inches from the front edge.  My Multi-Safer is about 1 1/2 inches wide, so the remaining inch was going to be folded up and over so that with 3M tape on the inside face, it would stick firmly to the underside of the dash, and give a bigger face for my stuff to stick to than the dash lip.

Switches
To bend this plastic, I simply sandwiched the flat face the switches would mount to between two steel sheets, weighed down by a paint can, then used a heat gun to slowly soften the exposed width and welding pliers to pull it down and back to the desired shape.

I lined the face that would rest against the back of the dash panel and the upper face of the piece upon which I'd mount my switches with 3M tape, and voila!  A non-conducting bracket to allow a firmer steadier seat for my switches. 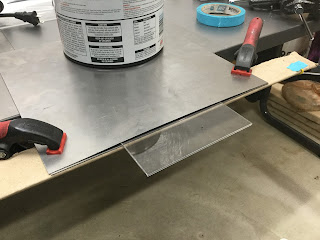 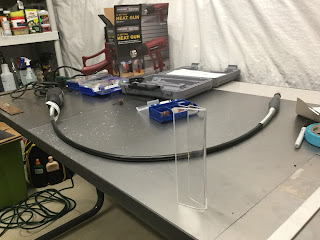 NOW, back to the wiring.  I plugged everything in and.......nothing.  I checked my fuse tap; good.  I checked my splicing; good.  Then what the heck was the problem?!?!?!

Turns out, the ever so thin wires that make up the wiring harness for the Multi-Safer are extremely delicate where attached to the plug.  I had to "re-snug" them into the plug.  This is my only quality complaint of the Moto Park Multi-Safer. Either make the plug a little bigger to grip without adding tension to the wires, or make the wires a little thicker.

The BlackSys provides an app for your smartphone, and a program for your PC.  With your phone, while you're within 3 feet of your camera, you can view the files saved, or do a live feed from either camera.

For your PC, you have to connect the SD card via a USB port.  You can configure your system, view files and save them to your hard drive.

Haven't had a chance to drive with it in daylight yet.  At night, on dark roads, the rear camera doesn't show much, but both front and rear have decent low light quality.  The daylight quality appears pretty good.  It's nice to be able to stream live while driving, though do it safely.

Once I've figured out how to save files, I"ll post them on there.

Final pictures of install:  Outside front, outside rear: 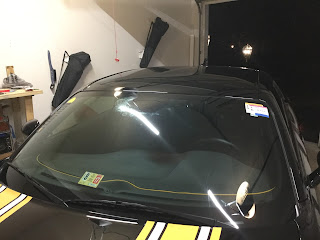 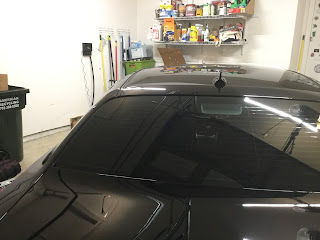 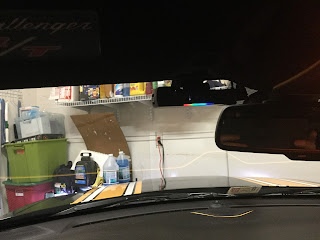 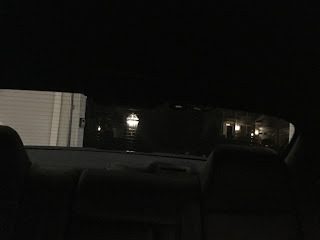 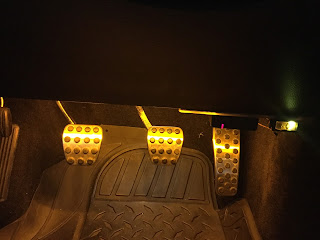